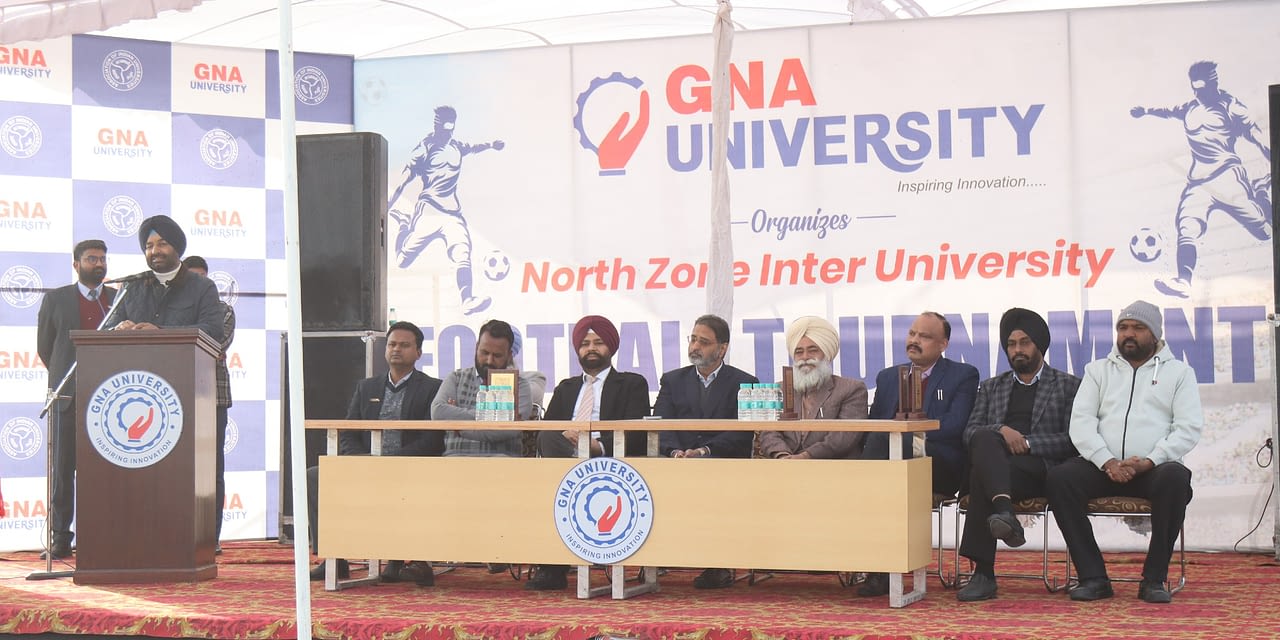 GNA University organized Association of Indian Universities (AIU’s)  North Zone Inter University Football Tournament (Men) in its campus. This event was a platform to grab the prestigious chance of being among top 4 teams of the North zone to further play at National Level.

Displaying zeal of ‘football fury’ this tournament started on 16 December 2022, and on the day one of this event more than 40 teams competed with each other in the knockout rounds. Day 2 of the tournament again had knockout matches between the participating teams. Dr. Parampreet, Head -Faculty of Physical Education and Sports along with his team Dr. Suresh, Ms. Navdeep and Ms. Manpreet worked relentlessly for the smooth conduct of this tournament.

The closing ceremony of this tournament was graced by Dr. Baljit Singh Sekhon, Joint Secretary, Association of Indian Universities, Delhi. He witnessed two league matches. In his address he motivated all the players and asked winning teams to gear up for the upcoming challenges, as at National Level competition will be more difficult. He also complemented GNA University hosting this tournament and for providing magnificent facilities to players.   During the Final league matches Dr. R.P. Singh, Sports Director, Kanpur University acted as observer. To witness the culmination ceremony Mr. Kunal Bains, Deputy Registrar, Dr. Vikrant Sharma, Dr. Sameer Varma, Mr. CR Tripathy, Dr. Deepak Tilgoriya,  various Sport Coordinators and other dignitaries were there

During the event, the energy and enthusiasm portrayed by every player was overwhelming. This exclusive event encouraged many young players to showcase their skills that would be beneficial for this game in our country. Teams faced a tough competition during the quarter-finals and finally four teams qualified for semi-finals. Out of which, Team of Punjab University, Chandigarh, bagged the Winning Trophy by securing First Position and  Gold Medal, Team from Sant Baba Singh University, Khiala, bagged the  Second Position and Silver Medal and  Team of  Punjabi University, Patiala bagged the Third Positionand Bronze Medal and Team of Guru Nanak Dev University, Amritsar got the Fourh Position

S. Gurdeep Singh Sihra, the Pro – Chancellor, GNA University congratulated all the winners, participants and organizing team of AIU North Zone Inter University Football Tournament GNA. He briefed about this event and encouraged the players to set their goals high and not to stop until they reach there. He appreciated all the players that they should take pride in being a part of this grand event and wished all the players a great success.

Dr.V.K. Rattan, the Vice–Chancellor, GNA University appreciated all the players for  giving their best during the tournament and suggested them to maintain mental and physical balance for excelling high in this game. He expressed his happiness at the enthusiastic participation of teams all across the Northern region.

Dr. Monika Hanspal, Dean Academics, GNA University insisted that sports are integral part of academics. She appreciated all the players for maintaining agility and coordination throughout the matches.